Many courageous travelers seek out hair-raising bridges just for the thrill. From sky-high suspension bridges to dilapidated rope bridges, these crossings aren’t for the meek. All bridges serve a purpose, whether utilitarian or inspirational and some of them add a distinct element of fear.

These scary bridges exist everywhere, in all shapes, sizes, and heights and crossing over them can be the ultimate in adventure travel. So get ready to face your fears or maybe find your next adventure with our list of the world’s most petrifying bridges.

Don’t look down. At this height, you’ll want to keep your eyes locked on the panorama of the craggy French Alps. Fortunately, the bridge itself is short, making for an easy escape if acrophobia sets in. But those truly afraid of heights probably won’t even see the bridge; getting here requires taking a cable car that climbs 9,200 vertical feet in just 20 minutes.

Where: The summit of Aiguille du Midi in the Mont Blanc massif near Chamonix. America’s highest suspension bridge may be breathtaking for some, but those scared of heights may be left gasping for air as they stare straight down nearly 90 stories at the Arkansas River below. Completed in 1929, the bridge didn’t have stabilizing wind cables until 1982.

Where: Royal Gorge, Colorado, over the Arkansas River. One of the Alps longest and highest pedestrian suspension bridges, Trift was built in 2004 to reconnect hikers to a hut made inaccessible by a retreating glacier. A replacement in 2009 gave this bridge higher handrails and stabilizing cables to prevent it from swinging violently in the wind. But it still provides an adrenaline rush.

Where: Trift Glacier, near the town of Gadmen in the Swiss Alps. First things first: nobody has fallen off this bridge. However, many visitors who walk across simply can’t handle the return and have to go by boat. It used to be even scarier. Erected by fishermen who went to the island to catch salmon, the original bridge had only a single handrail. The rope bridge eventually became popular with tourists seeking a thrill, and the National Trust replaced it with a sturdier structure with two handrails.

Where: Near Ballintoy in County Antrim, Northern Ireland. Originally built in 1889, this simple suspension footbridge surrounded by an evergreen forest is very high, fairly narrow, and extremely shaky—the cedar planks bounce on their steel cables as you walk across them. If the bridge doesn’t scare you, wait until the spring of 2011; the Cliffhanger attraction will allow visitors to climb across a series of suspended walkways attached to a cliff.

Where: North Vancouver, British Columbia, across the Capilano River. Some drivers get so nervous about crossing this five-mile-long bridge that they don’t even go. And this happens so often that the Mackinac Bridge Authority will drive your car or motorcycle for you (and for free). The biggest fear is the wind, which often exceeds 30 miles per hour on the bridge.

Where: Between Michigan’s Upper and Lower Peninsulas. This bridge leads to a ghost town, but it’s the squeaky wood floor that makes it scary. Fortunately, steel cables suspended from two towers bring a greater feeling of safety. Still, steel is a relatively recent addition: when German engineer Santiago Minhguin built this bridge in the 19th century, those towers were made of wood.

Where: The ghost town of Ojuela, an old mining settlement in the northern state of Durango, Mexico. Drivers are notoriously afraid of this bridge, as it’s subjected to frequent—and often violent—storms. And when the bad weather hits, forget about visibility: get to the middle of this five-mile-long bridge and you can barely see land. 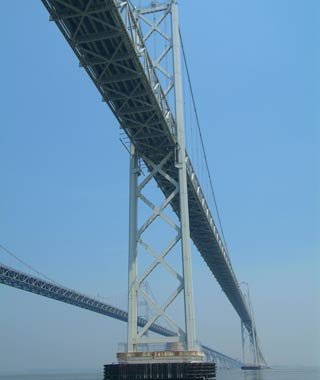 It may seem that only monkeys could make it across traditional monkey bridges—after all, they’re typically made of a single bamboo log and one handrail. However, the name comes from the stooped monkey-like posture you have to maintain when crossing, so as not to plunge into the river below.

Various points across the Mekong Delta at the southern tip of Vietnam.

These bridges are built by hand by local residents and vary from town to town. Newer ones are made of concrete. Massive gaps between the planks, a wild side-to-side swing: there are reasons this is considered one of the world’s most harrowing suspension bridges. While rickety cable and wood bridges are common in this area, crossing this bridge over the rapidly flowing Hunza River is particularly frightening, as the tattered remains of the previous bridge hang by threads next to the one currently in use.

In the village of Hussaini in Northern Pakistan, crossing the Hunza River.

Floodwaters reportedly submerged the bridge in May 2010. However, due to its draw as a popular adventure-travel activity, the bridge is likely to be rebuilt.